'LIFE IS FROM CONCEPTION, NO EXCEPTION!' 2017 SPUC Youth Conference

Hi! I'm Ettore, eldest of the Finaldi clan, I'll be 17 soon and this year I was finally old enough to go to the youth conference of the Society for the Protection of the Unborn Child. Here's a little report on a great weekend. 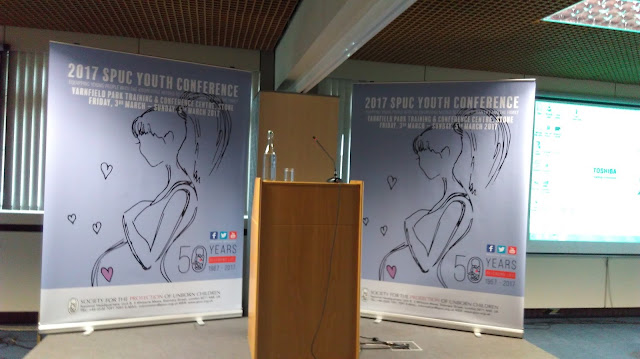 It began as any other Friday, long and labour intensive biology lesson followed by an even longer Government and Politics lesson... a two-day conference was the last thing I wanted to do after the tedious week I'd just had, but I knew it would be worth it in the end so off I went (funny the tricks the devil plays on you!) Anyway after a train, an underground and another train I finally arrived in Stoke on Trent some 200 miles from home.

Outside it was dark, dreary and rainy, the complete opposite of the atmosphere I found inside the conference. After making immediate acquaintance with three friendly Mancunians I went to check in. The room was brilliant, but I'm not here to give a review of the venue (which was brilliant by the way.)

I arrived at the point of a quiz, it was great fun that bonded us as fellow pro-lifers, it was a perfect start. From that moment friendships were made and it set a perfect tone for the days ahead, knowledge and fun. 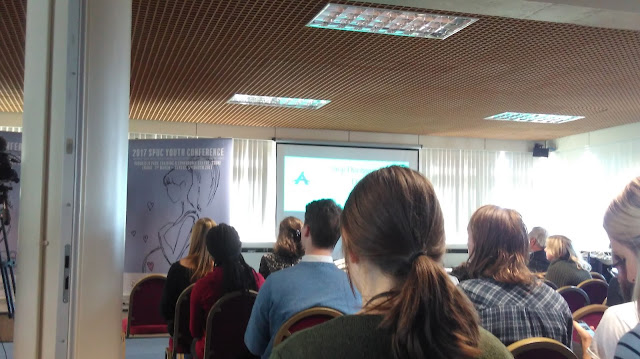 Day 2
Now being as lazy and a late riser I missed breakfast, Mass and the workshop. Shame, but luckily I came to what I found to be the crown jewel of the talks, 'From Pro-Choice to Pro-Life' by Dr Tony Levatino an ex late term abortionist, and if you're as aquatinted with the Pro life movement as I am, he's kind of a celebrity, so I almost screamed when I saw him the way a fan would! But jokes aside he gave a harrowing talk about the reality of abortion and his joining of the pro-life movement.

After that inspiring talk we got to ask questions, we asked for his conversion story and he gave us a shortened version. The part that stuck out most was when an old lady said to him in his pre-christian days "it's great to see what Jesus is doing in your life.' he responded with something along the lines of "I don't really believe in the whole thing." she replied saying 'Jesus knows your name, he'll get you sooner or later.' and now he's Christian. Funny how things turn out.

This was followed by a quick tea break and then a very sad talk by Alexandria Tompson called 'The problem with screening for down's sydrome.' This highlighted the 'unintented' eugenics of abortion, how soon we will become a world without children with down syndrome due to abortion, and how we must be willing to lose things for our views, shown through Jérôme Lejeune, the French scientist who became famous for discovering that Down's syndrome was genetic, and once his discovery was used to abort the child before birth, he fought against it and fought for their right to life, this cost him his career and countless awards, but he knew they were meaningless compared to the mass genocide that was happening.

The thing I learnt from this sadly truthful talk, was that we must be willing to take one for the team, our views are important but if we hide them and express them in the secrecy of our own homes they are useless and will never change anyone's mind, enough of being a closet pro lifer! You may lose your job but thousands are losing their lives every day and if he did it we should follow his example (especially since Jérôme Lejeune may become a saint).

Guys be prepared to take one for team life and in the words Congressmen Henry Hyde 'As a Pro lifer when you die and you come up in front of the Eternal Judgement,  before the throne of God there will be a crowd of children pleading on your behalf, saying "Please let this person in, he did so much for me".

This was followed Dr Anthony McCarthy's thought provoking talk on gender theory and showing what a bad position the secular world has come to, as the 'I think therefore I am' mentality has lead to things as far as 'I identify as an attack helicopter.'

The Scots then came up to show us the work they had been doing around their glorious land, a week of pro-life activism around different towns and cities in Scotland for young people, something I would highly recommend for youths looking for adventure and empowerment.

It was time for another tea break and a highly fascinating talk by Dr Patricia Morgan on 'The Family Under Fire.' a once again depressingly realistic talk on how the family has and is deteriorating at an alarming rate... though to every action there is a reaction, we were told WE ARE THE FUTURE and we stand in defence of the family.

The talks finished, we had dinner and free time to freshen up for the Ceilidh. After a pleasant meal and a shower I joined the community of like minded people (a strange feeling, I sometimes tried to start arguments on purpose to feel more at home!) ...we danced the night away full of fun conversation, embarrassing attempts of certain steps and great music.

It was great to be in communion with these fellow pro-lifers during these hard times. As the night progressed and the music stopped, the softies went to bed and others stayed into the early hours of the night talking about whatever and whoever, I spoke with many different people and had great fun, until words turned to music once again when we were joined by a tipsy philosopher with a guitar who told us about how 'God was love, the liturgy was the source and summit of our faith' followed by Ed Sheeran sing-songs, it was great to be amongst like minded young people. 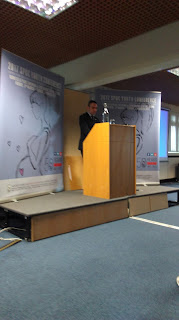 Day 3
I woke up few minutes before Mass, chucked on my Sunday best and ran to the room where Latin Mass was held, the room was overflowing with young Christians. After Holy Mass we had breakfast and checked out.

Since debates are one of my favourite things, I attended a workshop by Dr Anthony McCarthy on how argue hard cases . Once again we drank tea and moved on to our last talk, by Dr Joseph Meaney a highly uplifting talk on the the effect of our work and the reality of abortion facts, the fact that the worst human rights abuse in the history of the earth came from the worst political system on earth, communism.

The talk ended, received thunderous applause and was followed by a great inspiring March for Life presentation, we watched an amazing video that made us feel (and rightly so) awesome! This is a pro-life march taking place in Birmingham this year... If you are reading this post in the UK... this calling is for you too...you have no reason not to attend, babies need you to go too! Even if you do nothing else, the more people there are the louder the voice, 'LIFE IS FROM CONCEPTION, NO EXCEPTION!'

I can confirm I did not regret attending the Youth SPUC Conference after my long and tiring week and I strongly advise any young Pro-lifer to go, you will not regret it. It's great fun, teaches you loads, you make friends and equips you to fight for life. I cannot recommend it enough.