Catholic women bloggers  all across the world are publishing posts today on some of the unsung heroes and defenders of the most vulnerable members of society: the unborn. Here's the story of a group doing amazing work in the heart of London. 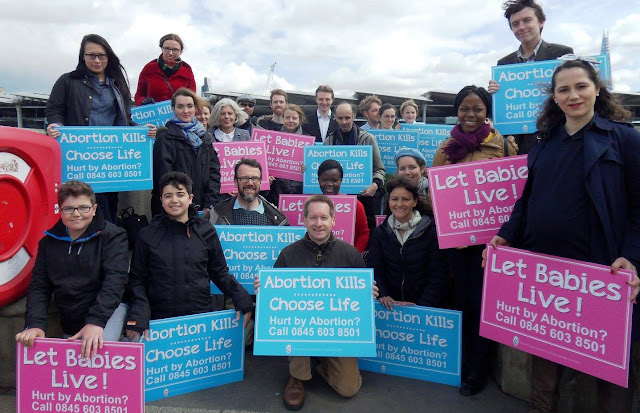 Although never actively involved in the pro-life movement we've always been a pro-life family. That only changed in 2014 when our eldest son Ettore found himself in a pro life minority at his Catholic school so he started researching arguments and talking points so that he could enter prepared into debates to defend life.

Ettore spent two weeks of work experience at the  Society for the Protection of the Unborn Child and he also had the privilege of spending a few afternoons praying the rosary outside abortion clinics .

His first experience outside those facilities was very strong and sitting around the dinner table, the talkative Ettore was left speechless. He brought home the suffering of the women that entered those doors of death. The natural next step was to get in contact with pro-life organizations and see how to help.

Among the Pro Life Organizations in London one in particular came to our attention: the 'Good Counsel Network'.

The big abortion providers in the UK like BPAS and Marie Stopes have plenty of visibility in doctor's surgeries and hospitals while the kind of work done by the Good Counsel Network lies hidden and goes on quietly and constantly saving as many lives as possible.

"Abortion kills twice. It kills the body of the baby and it kills the conscience of the mother. Abortion is profoundly anti-women. Three quarters of its victims are women: Half the babies and all the mothers."

Last week despite being in the middle of some vitriolic attacks from the UK national media Clare McCullough one of the founders of the Good Counsel Network found the time to answer some of the questions I've always wanted to ask her.

What inspired you to set up the good counsel network?

A man I met who was doing this work in Dublin, Eamonn Murphy. He came over to the UK to show us what he was doing in Ireland. Once I saw how he was reaching out to women I knew I wanted to be involved. At first I waited for someone else to start it so I could help! But finally he set it up really and dropped it into my lap. I knew if I didn’t start working on it, it was just going to fizzle out and I couldn’t bear that happening.

What is the most common reason for a woman to present herself for an abortion?

We see all sorts of reasons. Lots of illegal immigrants with no papers, no rights to work, no rights to housing or benefits and in the UK most people think that “everyone” gets housing and benefits if they are in need. Little do people realise most of these women do not even qualify for help at homeless shelters and so we regularly take 8 month pregnant women off the street. Others are fleeing domestic violence or family disapproval. Many come because they are not in a stable relationship. But if I have to name the one common factor, it is contraception. Even the UK’s two major abortion chains say that about half their “clients” are using contraception when their unplanned pregnancy occurs.

Are more Catholics presenting themselves for abortion than one would expect?

There are too many Catholic women that we see. I think at first I was shocked to see how many Catholics were looking for abortions. But now I completely understand that Catholics have had very poor teaching on sexual morality and respect for life and general catechesis has been poor, at least throughout the West, for some time now. Naturally this leads to people living as they have been taught. The weak passing on of the Church’s teaching on contraception is a huge problem in this regard too. Unfortunately many other Christians are also aborting in large numbers. But we think it’s a blessing when God sends these ladies to us and we have a chance to offer alternatives.

What is the average age of people presenting themselves from abortion?

In our centre 25-35 is about the average age. But nationally it varies. Young single women from the early teens and up are very vulnerable to abortion. Schoolgirls can have their abortion booked for them by the school nurse and be referred straight away for abortion with no parent being informed.

If you could say one thing to somebody considering abortion what would it be?

If the person had any belief in God, I would say, “Please pray about your decision. Stop for a moment and consider why God has sent this child into your life now. You may think he or she is a “mistake”, people make mistakes, but God does not make mistakes.” – it is important that believers recognise that God is giving them a mission in their life, to be a mother. But whether or not she believes in God it would be important to build up her self esteem – encouraging her by helping her see that she can do this – respect her child’s life and achieve the things she wants to achieve in life, and then putting her in touch with good, solid support. If she really feels she cannot take on raising her child, we must also be able to help her compassionately to find life-respecting choices such as giving her child up for adoption.
When women turn away from abortion at the door of an abortion centre, 9 out of ten of them say “Well, I prayed about my decision and then when I turned up I met Jane”  [or some pro-life volunteer]. Many of these women don’t know for sure if they even believe in God. But their prayer seems to be heard anyway.

What is and what could be the father’s role in all of this?

The father is the missing person most of the time. He is often the reason for the abortion – if he says he doesn’t want the baby the chances of her aborting soar. Some men do come in with the woman, but often just to make sure the abortion happens. Occasionally we see men who desperately want the woman to keep the baby. Of course we support them and advise them in every way, but legally he has no say in her decision – so if he cannot persuade her to keep the baby she will have the abortion. Like women, men need to realise contraception is nowhere near 100% effective in the real world. And if the woman is open to abortion he needs to consider that before he risks a sexual relationship. Once she is pregnant, he will have to be able to address her fears about him or his commitment to her if she is dubious about having the baby. Instead he needs to make a commitment to her (i.e.Marriage) before risking sex and in preparing for that commitment, discover whether or not she and he share an unconditional respect for life.

What kind of practical help do you offer to women once they've decided to keep the baby?

We try to be directed by the Mother as to her real needs. We let her say “If I just had this or that I would cope”. In reality the help is mainly financial help, housing, moral support, legal or medical advice, maternity clothes, a place to hide, help with childcare, baby goods, ongoing counselling. But we are not limited to that and can provide help “outside the box” if the mother-to-be has an unusual request but we can see it would genuinely help.

Can you tell us about one experience that you think back to when things don't seem to be going so well?

This work is a continual spiritual battle and in a certain sense things never seem to be going well, because we often seem to lurch from one crisis (financial crisis, practical problems) to another (media attacks and so on). But we are so blessed to see so many women who were once set on abortion keeping their babies, You have a terrible day, where no-one wants your help or girls in awful situations get forced into abortions and you feel like you want to give up. Then you walk out of the counselling room into the reception and there are 3 women with their babies who you remember were in equally awful situations last year. And the annual Christmas party where we see dozens and dozens of mums we have been blessed to assist. Also having Mass and Adoration in our Centre each day really helps us. These things keep you going. 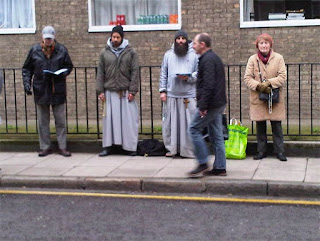 What would you say to people who think that pavement counselling is judgemental towards women in a difficult moment for life?

I would say “Go there and see for yourself” Go and see the way these women go in and how they come out. See women being dragged in there, literally sometimes, with no advocate on their side. Pope John Paul II said It is not right that they should be left alone. In the UK, the old model of reaching women via pregnancy testing and Crisis Pregnancy Centres is dead. Ask your local pregnancy centre and if they are honest they will tell you they are seeing almost no-one. As in the UK abortion is mostly free and you can get almost immediate appointments, anyone with the slightest doubts about their pregnancy can be shepherded to abortion centres before they have had time to think. We have actually had to call the police to help women inside the abortion centres who are calling us from the toilets because they are being pressured by others to abort! We have recently put some video testimonies of women who we have helped on the doorsteps of abortion centres on our website www.goodcounselnetwork.com  Please listen to them and then you will understand why we are there.

How can people support the 'Good Counsel Network’?

In so many ways! Firstly praying for our work is key. We believe it is a spiritual battle we are fighting. Secondly, financially. Supporting mothers in need is an expensive business. Thirdly by volunteering, maybe coming to pray at Adoration in our Centre (in Central London) or helping with the work in the Centre, or by volunteering at one of the prayer vigils outside an abortion centre. You can sign up for any of these options on our website. And you can sign up for regular texts about women we are praying for that especially need your help. http://www.goodcounselnetwork.com/