The UK doesn’t really do religious holidays! As a protestant nation of shopkeepers and business people, we have to wait for the prosaic-sounding secular feast days called bank holidays to get some rest and relaxation rather than looking forward to the romance and mystery of saints days and religious festivals. Lent has become a pale shadow of the severe season of fasting and preparation of Catholic medieval England so all that is left of the pre-Lenten carnival gaiety of old is pancake Tuesday. One city that has kept carnival alive in all its splendour is the romantic Italian city of Venice and Giulia, an old Venetian friend and member of the Catholic Mothers group has kindly written a guest post on carnival in Venice. 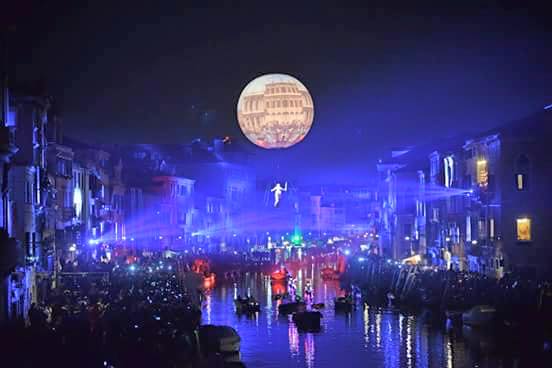 When Christmas time is over Venetians start feeling the expectation and excitement for what is one of the most interesting holidays in the world, the Venice Carnival.
We usually wonder how many tourists will join us, which parties to attend, the beautiful costumes we are going to see down the calles and we also begin to savour the food we normally cook or buy to celebrate this period of the year.
I’m sure you all know that the Venice Carnival is the most internationally known festival celebrated in our dear country and I have talked about food and parties mainly because it was first born as a public celebration to honour the days preceding Lent, the fasting period that leads us to Easter.
Back in History, the Venetian Carnival was a concession from the Senate of the Republic of Venice to the city, its objective was fun and people could indulge in music, dancing and parties. Wearing masks and costumes soon became a tradition and it allowed people during these days to hide any differences of class or status.
The word itself “Carnival” originally comes from the Latin expression “carne vale”, which means “farewell to meat”, referring to the long Lenten season of fasting and abstinence. Therefore, the Carnival is strictly tied to the liturgical calendar and always ends on Shrove Tuesday, the day before Ash Wednesday.
This hedonistic feast brings magic into our city. During this period there are many public shows and exhibitions, mainly in St. Mark’s square, but parties and unconventional performances also take place in private houses and in cafès where costumes balls are held.
Many Venetians celebrate it, but the city is also full of tourists and visitors, especially at weekends. It is a visual feast, which means that costumes and masks are the most significant part of it. You can see perfectly tailored traditional costumes but there are also very remarkable homemade attempts to create something unique, both for adults and children.


Among the most famous and diffused costumes there is the so-called baùta, which consists of a particular white mask which covers only part of the face, under a black tricorn hat and a black cloak. 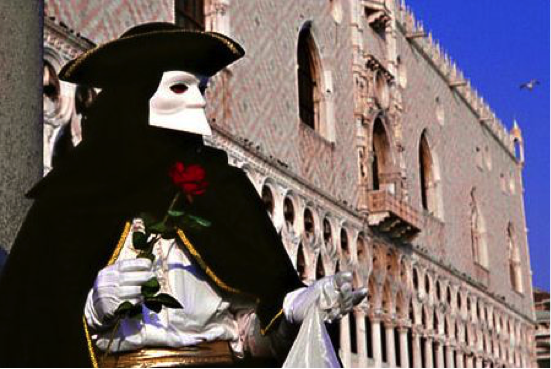 Another traditional mask, worn only by women, is the moretta, a black oval mask that is held in place not with a band or string, but by a button on the inside of the mask that is held clenched between the teeth of the wearer. However, this is not so common nowadays. 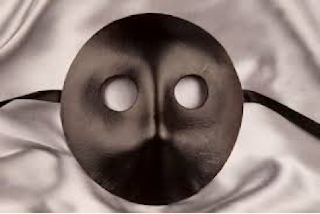 There are also other costumes taken from the “commedia dell’arte”, such as Arlecchino, Pantalone, Brighella and Colombina. 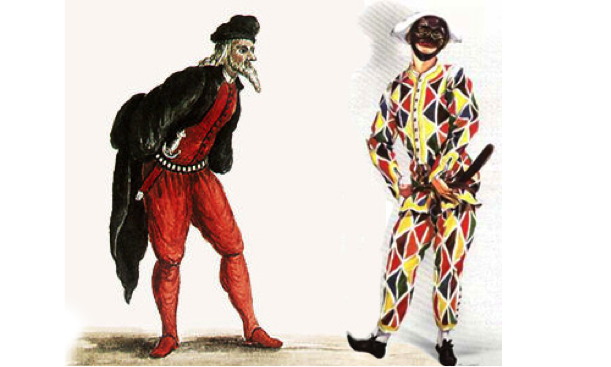 It is the huge variety of costumes that helps create a surreal atmosphere in the city. Even if you don’t wear anything special you can enjoy this time by simply wandering through the calles and admiring all the colours, tissues, laces, feathers etc. that animate the feast.
For the city itself and for tourism in general this is a key period. On the other hand, for local citizens it is also a very challenging time. Venice is a small city and people always move on foot, or by boat. The calles are heavily crowded and tourists sometimes seem to forget that there are people who live in the city and are not on holiday.
However, it is also for them a time to celebrate and also to take a break. Children have some days off from school and are very involved with costumes, activities and interesting events. Bakeries are full of galani, frittelle and castagnole….yum! And even if Venice is such a small reality you can breathe its international vibe. 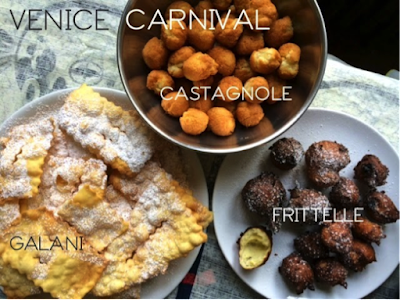 Till a new time comes and Lent with its deep meaning washes away all confetti and streamers.
Posted by Chiara Finaldi at 2/24/2017