A Benedictine Break at Buckfast Abbey 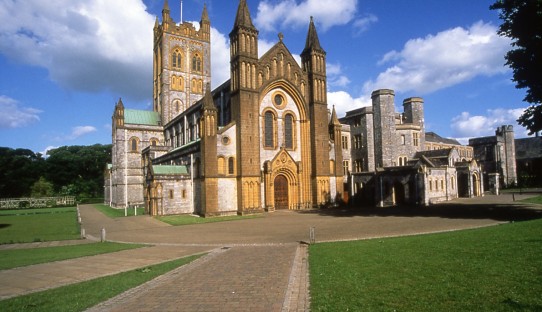 We only came back yesterday from a very short break at Buckfast Abbey in Devon, South West England, for the anniversary of the School of the Annunciation and the launch of a new UK edition of the Catechism of the Catholic Church, a project Pierpaolo has been working on for three years.

The drive from London was about 4 hours long but very pleasant as it reminded us of the many travels to visit churches, shrines and innumerable archaeological sites in Sicily during our courtship.

Pierpaolo had visited the Abbey about a year ago to discuss the Catechism with the staff at the School based at the Abbey and had promised to take me with him next time.

I was very excited about going and especially about not having to cook for a couple of days.

I had no idea what to expect when I got there so I was in for a treat...

There was the Abbey in all its majesty... It was a real surprise to see such unexpected beauty!

We arrived just before vespers and the quiet green fields all around the Abbey spoke of God's glory and seemed effortlessly to praise His magnificence.

As we walked into the Church the Monks started chanting the Psalms. The moments of silence were sublime and the smell of Incense divine. As a mother, one is rarely able to devote oneself totally to prayer... but on Sunday I felt very blessed to receive this gift from above.

The Abbey looked sparklingly new and yet at the same time felt deeply rooted in the almost 1000 years since the foundation of the monastery. The first Abbey was founded in 1018 and was then rebuilt completely in 1147 by the Cistercian Monks, an order founded to return to St Benedict's original Rule, living in an atmosphere of silence and striving to create an harmonious balance between prayer and work.

In 1539 under the disastrous reign of King Henry VIII the Monks were sent away and the Abbey dissolved, the land was sold and the buildings fell into ruin. 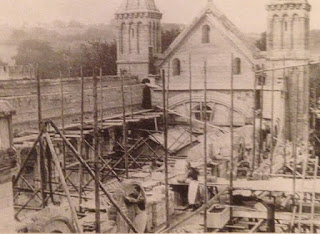 It was only in 1882 that an exiled group (about four of them) of French Benedictine Monks in search of a home bought the land and what was left of the Abbey and began to rebuild the Monastery with their own hands and efforts. 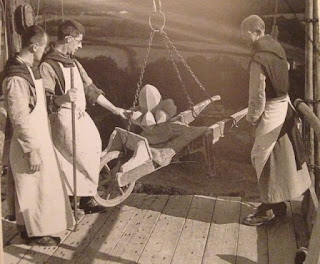 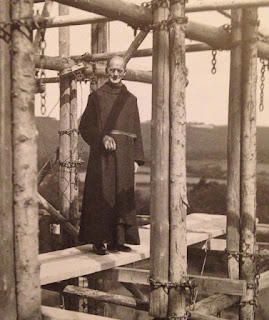 Money was tight at first so they erected scaffolding from wooden poles held together by chains and ropes and built walls 150 feet from the ground with no helmets nor safety rails. God was clearly with them!

The Abbey was consecrated on the 25th August 1932 and all the works were completed on December 1938.

Today there are about 15 Monks living their life to the full, praying and working hard producing their tonic wine, honey and serving the community around them.

'Let all the guests that come be received like Christ, for he will say:"I was a stranger and you took me in" and let fitting honour be shown to all'. St Benedict.

The sense of the sacred was tangible in the Abbey and all around it. The architecture was typically monastic, speaking of stability and solidity, of quality, care and beauty. The Abbey Church stands in the middle of it all, a magnificent building but unlike so many modern ones, it does not speak of its own glory but fulfils its humble task of bringing us, the people of God, to Him.

Monday was the feast of the Annunciation and an especially solemn Mass was celebrated with the local bishop. the grand organ filled the church as the voices of the choir soared above and brought the soul closer to heaven.

I thought of the wonderful alliance of families and monastic communities that kept the faith alive and flourishing in Europe through the middle ages and could see myself and my own family living close by and in harmony with the life of the Monastery... I blessed the Lord for these men who like Christ and for Christ gave up their life to serve and to bring dignity to the community around them. 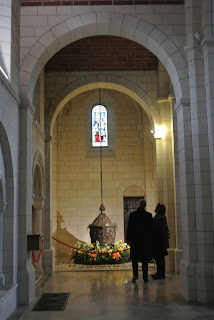 All that beauty, that order, that silence, that warmth, that chant, that music and scent... all that... was there for me and for all the people passing through, believers or not, as a gratuitous gift showing the Love of God for every man. 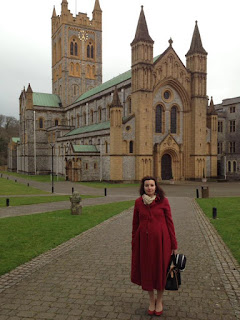