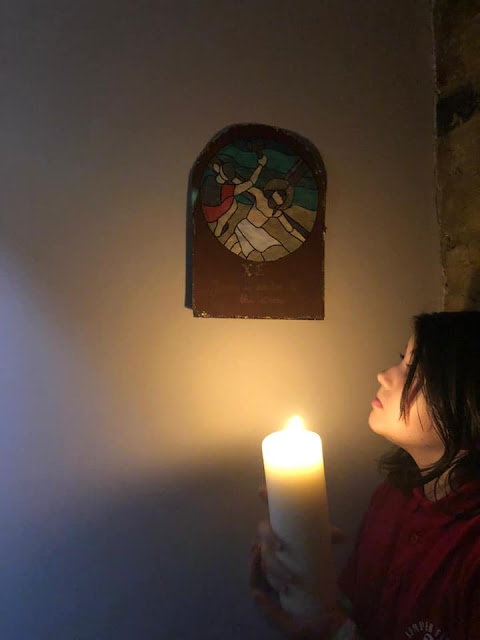 Last night we tried something new. Something we had never needed to do before or ever planned to do. We took it for granted that our Churches would always be open! Although we have always immensely valued the Domestic Church, we had never imagined that it was going to be (at least for a time) the exclusive centre of our Faith.

So here we are with a community of people, small and big, depending on us parents, to guide them through this desert, holding on to us, holding on to the Faith passed onto to us from our parents,  knowing that  “where two or three are gathered in my name, there am I  among them.” – Matthew 18:20

As it was Friday in Lent we would have attended the "Stations of the Cross' devotion in the Parish...Instead we put up our handmade stations around the house, beginning in the kitchen and ending in the little girls’ bedroom, and set off on a journey around our domestic Jerusalem.

The younger children learnt the responses and Pierpaolo, - the Bishop of the Domestic Church-  led the liturgy and sang the verses from the Stabat Mater. 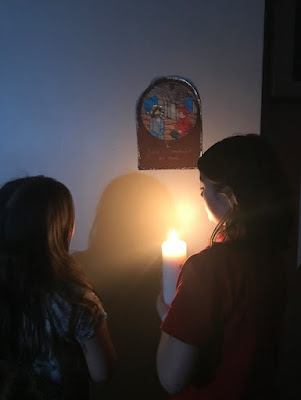 Lucia held a candle in front of each station as we moved through the house.

It was a beautiful moment of prayer and one we’ll do again on Good Friday.

How we made the Stations of the Cross:

I wanted something easy for the children to put together, something they needed little help to do but where the final result would be nice and tidy! So as we had been learning about Stained Glass window techniques I thought that kind of pattern could work.

I ordered some downloadable  patterns  and we started this project hoping for a good result as well as finally learning the order of the Stations. 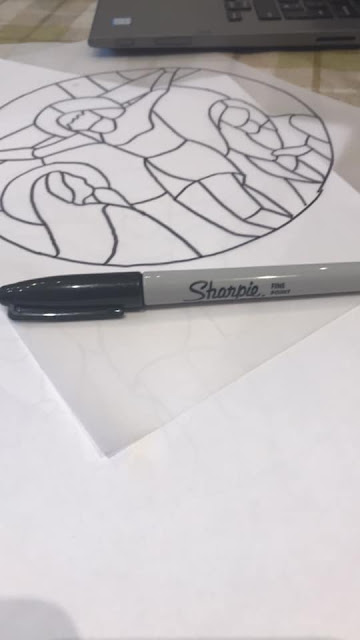 We printed the pattern to fit an A4 Sheet and the children then traced the image with a black Sharpie onto (let's call it side B) of a piece of tracing paper. 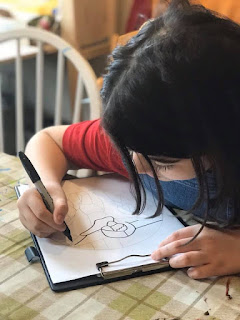 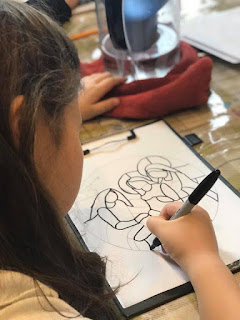 We tested a great number of types of paint but decided that children's liquid Acrylics worked best. We also painted on side B 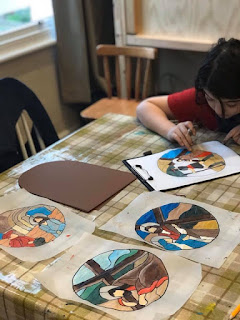 It took the girls a very long time to paint them all, and everyone - or most of us - had to, at some point, help with the painting as we had to finish them in time for our family liturgy (so make sure to give yourself 3 days to complete this project or a whole afternoon with no interruptions).

Once the the paint was dry, we turned the pictures over to the side you are meant to see (Side A) and I applied a very thin layer of gold leaf glue to the halos and swords and after a few seconds applied gold leaf to each picture (Gold paint would also work). I did the same with swords using Silver leaf instead. This really lifted the pictures and brought the colours to life. 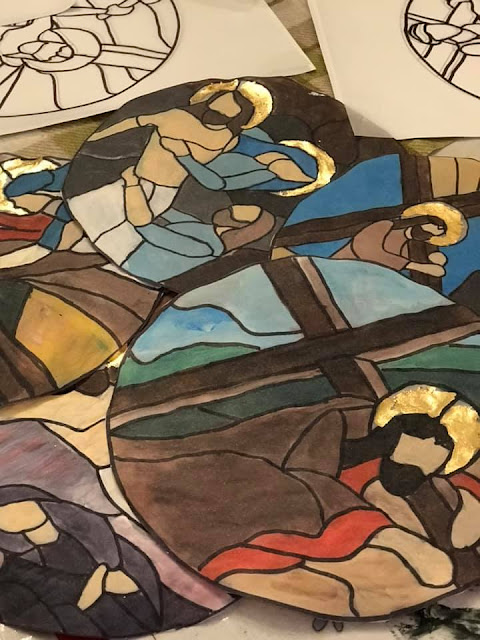 We cut the pictures following the circle of the pattern and glued them onto some brown card, I had laying around, where we had pre cut a smaller circle than the picture to allow light to come through the tracing paper from the back. 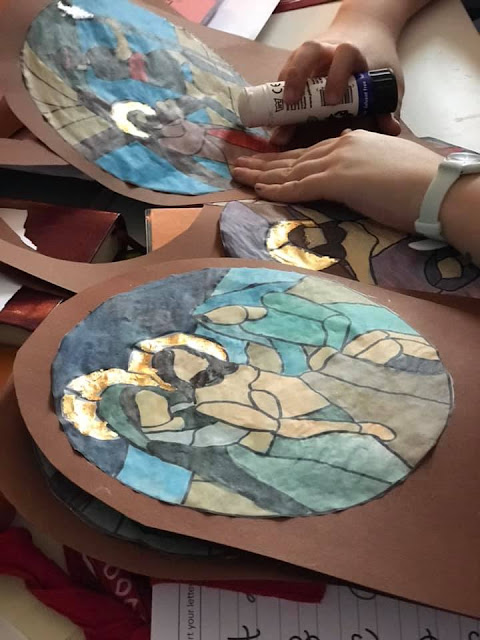 Elena, wrote the number of each station directly below the picture on the brown card with a Gold Sharpie. We then applied gold leaf on the Roman Numerals as well as the borders, once again, applying a very thin layer of glue, waiting for a few seconds and applying the leaf with the intent to have an 'antique look' of Gold coming off and missing in some parts. 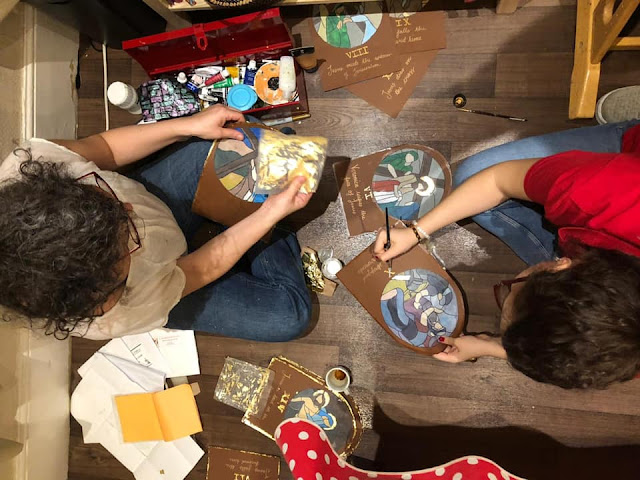 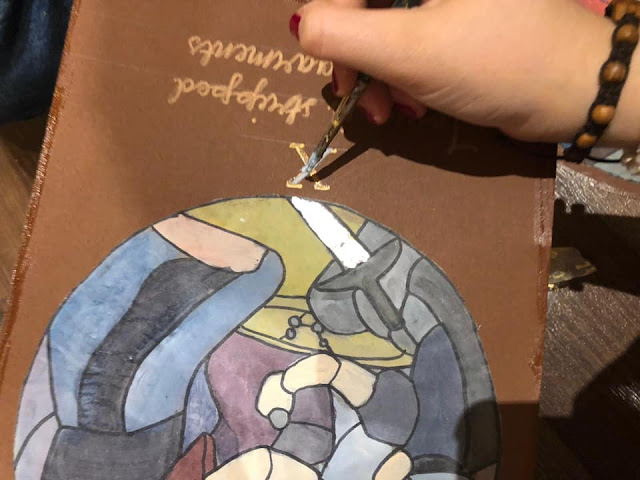 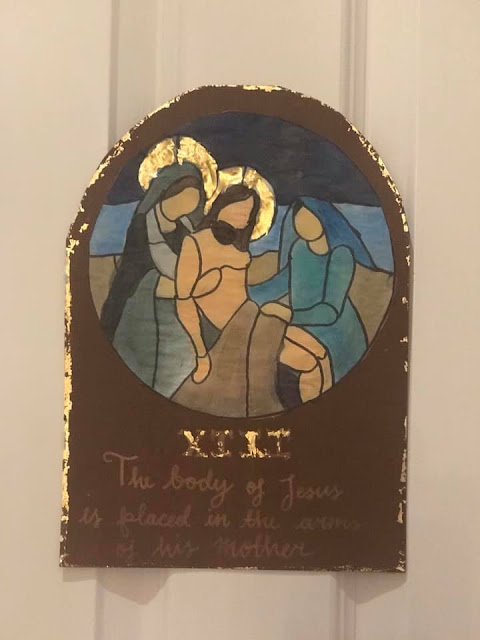 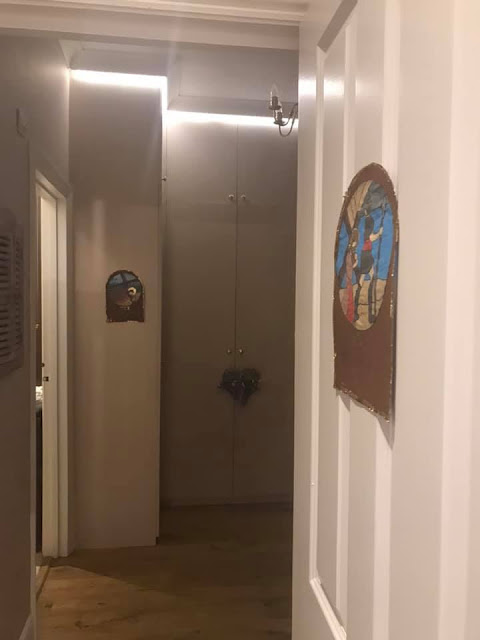 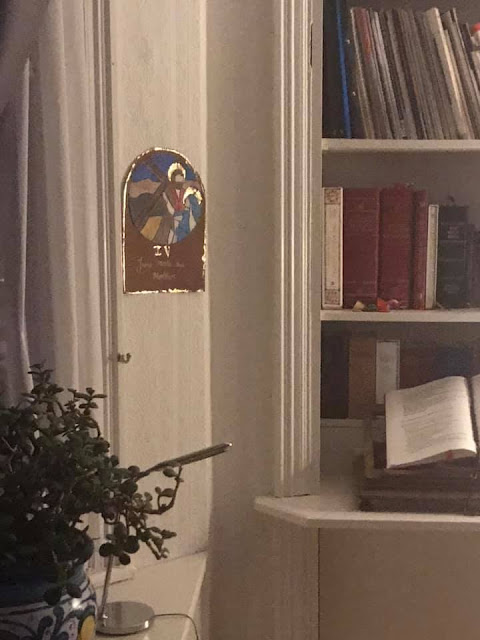 The Family Liturgy was very moving and because it wasn't static and was done by candlelight the younger ones found it fascinating.


We started from the kitchen, at the heart of our domestic life, and went around the downstairs rooms then up the stairs to calvary. We strategically finished the procession in the yourger children's bedroom, naturally accompanying them to bed.


The girls were put in bed, the candle was blown out and we experienced a sort of bitter sweet joy, longing for something we never knew would be hidden from us for a time. 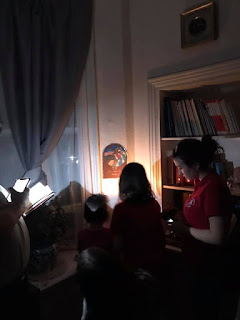 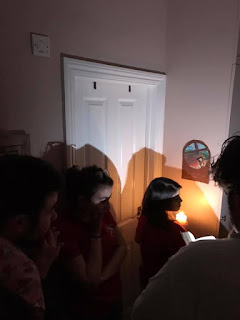